Of all the domains, the industrial segment is the one that changes a slow phase, because adapting to current installations and working conditions at a quick pace would have a huge impact on the process of production.

With the rise of industrial revolution 4.0, adaptation has become something inevitable and customers have been forced to change. But still, customers prefer to work on their own pace favoring incremental updates. Considering this, the vendors of industrial automation solutions are upgrading their products incrementally rather than full-featured overhauls.

We, at Embien, understand the scenario very well and offer to work along with vendors in creating an updated line of products.

A major OEM, manufacturing industrial control systems such as Programmable Logic Controllers (PLC), soft starters etc., had come up with such a need for an Android IO Module Manager.

Multi-channel IO modules include salient features like monitoring and controlling up to 16 IOs. Some of them are:

Concerning the requirement, RS485 with Modbus/RTU protocol was chosen to be the control interface. Being a legacy system, it could not be deployed for modern wireless SCADA systems. The client approached us to upgrade the existing system to support wireless access with minimal modifications to the system architecture.

The client’s current system was based on Renesas RL78, and had limited provisions for expansion. Our expert engineers were assigned to understand the complete design and functionality of the system module. They came up with a solution that would take advantage of an additional UART port that was reserved for debugging purposes.

To maintain both the changes minimal and higher-level protocols compatible, Embien suggested the usage of Modbus/TCP protocol over Wi-Fi. Since a great deal of market is filled with wired systems, an add-on card-based approach was recommended. Without the Wi-Fi card, the product had wired connectivity alone, making it controllable over the RS485 network. Adding the Wi-Fi expansion card enabled wireless management of the module. This add-on card approach also resulted in reduced production cost of the base module and prevented unnecessary loading of the BoM cost of the Wi-Fi feature.

We also analyzed the recorded on-field failures of the previous generation product and incorporated a few robust safety mechanisms in the design to prevent such failures. 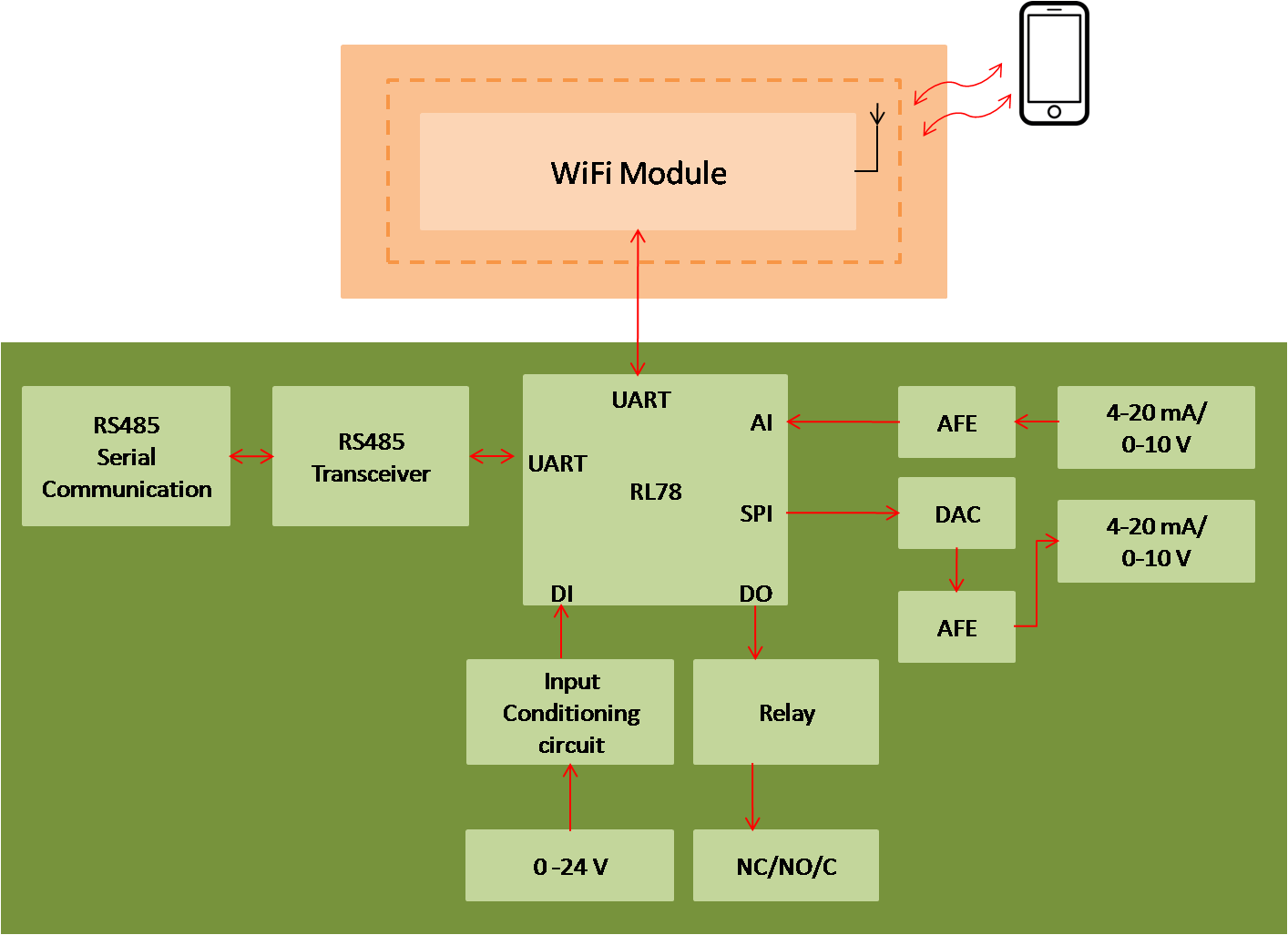 Once the client approved the design, Embien developed a firmware for the Multi-channel IO Module System that could function automatically, irrespective of the availability of the Wi-Fi card. Existing Modbus registers were preserved, and additional ones were added for Access point configuration dynamically only in the presence of the Wi-Fi card. We also improved the firmware implementation for reduced power consumption.

Embien designed and developed an Android-based Modbus Client for the customer. On factory reset, the IO Module was programmed in such a way that it gets connected to a default access point. Android App can be entered into a commissioning mode and AP Modbus registers can be configured to connect with the preferred access point for further operations.

For operational purposes, an intuitive UI was provided along with many pre-configured widgets such as Line graphs, Bar graphs, buttons, meters, seek bars, lights, tanks, etc., The app permitted instant project creation with a layout of the plant/factory in which it was being deployed. It can simultaneously manage multiple IO modules. Being a generic Modbus TCP Master, it worked seamlessly with other standard devices such as third-party PLCs, IO controllers etc., within the same network. The Modbus TCP Android App was tested rigorously to work with various versions of Android and device resolutions.

Embien also assisted the client in adding the new features into their Windows-based application. The SCADA software had libraries that extended the functionalities. By working on the library that corresponded to that particular module, we were able to support Wi-Fi configuration via the newly added register set.

We, at Embien, excel in connecting, analyzing, and delivering the client’s requirements with utmost excellence even at stringent timelines. We hold a profound expertise in product up-gradation, BoM optimization, EOL Sustenance services that can be leveraged to increase the market share and brand value.

Looking to improve the feature set of your products?

Get in touch with us @ www.embien.com.