Smart Energy meters are the need of the hour to improve optimal power generation, provide effective net metering, tackle power losses, and lay a foundation for a modern smart gird. Modern meters have been developed with wireless connectivity such as WiFi, 4G, LoRa, etc. Such meters enable long connectivity and are more commonly deployed in industries where remote energy metering is needed for profiling the energy consumption and managing the energy demands.

But millions of energy meters that are already deployed in developing countries like India cannot be upgraded immediately. The changes will be gradual with increasing automation on a step by step basis. As an improvement in the existing process of acquiring energy reading for billing purposes, Embien has helped a customer acquire readings faster with BLE connectivity. Details of the implementation are explained in the below case study.

For small scale commercial and domestic metering, at present there are handheld data acquisition devices available that will connect to the energy meters via wired connections such as RS232, RS485, and infrared optical ports. Security concerns mandate that the communication interface between the energy meter and handheld devices should be more reliable and tamper-proof. Energy meters do have standards for electricity metering data exchange. The most important standard is the IEC 62056, also known as IEC 61107. It is an international standard for any computer to read the utility meters. It specifies the protocol when operating over any media to communicate with the meter using handheld devices over a serial port.

Among various communication options, optical ports are more common. It allows two-way communications and can be found as a circular feature on the face of the meter including a flat ferromagnetic ring with infrared LED and photodiode at its center. It is designed to communicate with a modulated light sent with an infrared LED and received via a photodiode. An MCU with UART interface will be sufficient to communicate with the energy meter over optical port provided the command sequence and formats are correct.

Further it is non-invasive and does not need the reader to open the meter in the process. Simply the cable connecting the handheld device with the optical port of the energy meter will have a matching ferromagnetic connector that will lock due to magnetic attraction. Any field engineer acquiring the energy reading has to plug it in and remove it after acquisition.

An energy meter manufacturing company approached Embien intending to introduce innovation in meter reading together with reduction of energy reading acquisition process. The requirement was to wirelessly acquire the reading from the existing optical port of the digital energy meter and replace the custom handheld device into a smartphone-based system. An Android application should be developed suitably for acquiring the readings wirelessly and push it to the cloud directly using the 3G/4G network already available in the smartphone. Also the optical port to wireless converter module should be very compact that can fit the existing optical port socket and operate through battery supply for long duration.

Regarding the application development, the customer already worked on the Android application part and was ready with the app. So Embien was requested to develop the hardware part and its embedded software developments. All the command sets and their descriptions were shared for further developments.

Embien upon a detailed study of the customer requirement has proposed to develop a BLE based wireless converter module that can convert the optical port to BLE based wireless communication port. For the BLE connectivity module, Embien suggested its ultra-low power and compact BLE module “eStorm-B1” for the rapid deployment of the required system. Only a few components were required to build the optical port to the wireless converter module. The ultra-low power consumption makes it suitable for low duration battery power operations. Also the compact dimension of the module supports easy integration into the existing designs.

Upon customer approval, Embien started the development with the eStorm-B1 BLE module and enabled optical connectivity. The module was powered by non-rechargeable battery and due to the intelligent power management the battery last long for more than 6000 readings.

The following video demonstrates the working of the smart energy metering setup including eStorm-B1 BLE module with a prototype board, test Android application and digital energy meter.

The project has been delivered to the customer in a short timeline of 2 weeks. The customer was more than happy with the compact design and desired performance of the wireless meter reading. Once again a rapid deployment made possible with Embien’s eStorm series of platform.

Kindly contact us to help us solve your problems effectively and faster. 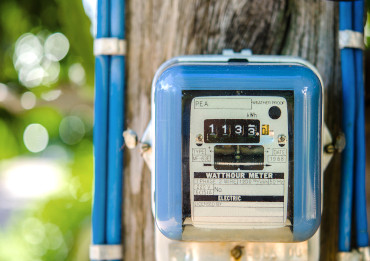