We are proud to announce that Embien's engineers have been selected in 'Renesas GR Peach Design Contest 2016' as two of the Top 20 finalists.

Renesas along with Electronics For You conducted GR Peach design contest in which a large number of Professional Design Engineers, budding engineers and students have participated. The participants were asked to design a unique embedded system using the Gadget Renesas Peach Board. GR-PEACH an mbed enabled platform from Renesas is used in this project which includes high performance ARM Cortex - A9 core operating at 400 MHz with inbuilt 10MB RAM and rich peripherals such as SPI, I2C, UART, Ethernet, CAN, I2S, and GPIO etc.

For this, two teams of our engineer's participated and submitted projects called 'Intensive Care Terminal with GR-peach' and 'Production Management System'. On 1st September 2016, our team's abstracts are approved by Online Judges and teams entered as a part the Top 150 contestants. Later our projects were evaluated and moved on to the Top 20s on 16th February 2017.

In most of the hospitals no family members of the patient are allowed to enter or visit the patient who is admitted in Intensive Care Unit. Due to their very busy schedules the doctors and nurses have no time to regularly update the condition of the patient to their families. The main aim of our project is to create an audio visual interaction between the patients and their family members through a device and supporting the physicians to remotely monitor the patient's using live video streaming with interface options for existing patient monitor device for reading patient vital parameters such as ECG, SpO2, NiBP, CO2, temperature, etc.

The bedside unit will be placed in a table with motor arrangements. With this setup, the location of the unit and angle (tilt and rotation) of the unit can be controlled remotely for better visibility.

The bedside unit has the following features.

For demo purpose, the tablet is used as a remote unit with a custom Android App called ICT App. The ICT App supports live communication with the inbuilt camera and audio. The patient vital parameters are graphically represented as it is displayed in the patient monitoring device. Navigation buttons are supported for table motion and viewing angle control.

The following figure depicts the screen shots of the ICT app with patient vital parameter readings fetched from the cloud.

Small Scale manufacturing industries normally use manually operated types of machinery for manufacturing their products. The foremost aim of any industry is to improve their production with respect to time. The high productivity within short period involves proper planning, organizing, directing and controlling of the production process which is called Production Management. In the PMS project we made the Production Management at its ease with RZ/A1H.

This project is based on the Cloud based Production Management System which acquires and process the data from IO modules and visualize some parts of processed data locally and the complete result on cloud database.

For demo purpose, both the press monitor, integrator/cloud gateway are realized using GR-Peach board which support ADCs for sensor integration, Ethernet for cloud connectivity, camera interface for floor video capture.

The major functionalities of production management system is as follows 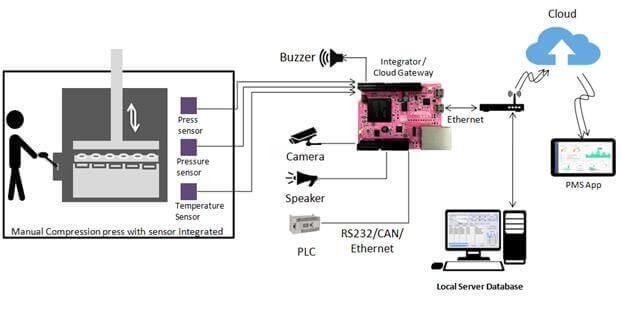 The following picture represents the dashboard of the App with multiple widgets to graphically represent the production, operator status, etc.

We were invited to showcase our projects at the live event organized on 2nd March 2017 at Leela Palace, Bangalore. Though unable to win in the GR Peach Design contest, our team's efforts were appreciated and were a head-turner in the demonstration.

Our cloud based solution for managing your IoT devices

Check out the list of files available for downloads