The industry of automotive components has witnessed a huge technological advancement in the recent past. The main reason for this upheaval is the increased accessibility to driving parameters such as vehicle speed, engine speed, fuel level, collision avoidance, driver monitoring, location tracking, traffic monitoring, etc., within clusters.

Initially, automotive manufacturers used segmented (or) graphical type displays to extend the availability of vehicle information to their consumers. Earlier, odometers and multiple trip meters were a part of the cluster functionality. After the depletion in LCD prices, OEM’s began to add TFT displays in two-wheelers. Even though these displays offered numerous functionalities within constrained spaces, electromechanical dials were still in usage. Hence, manufacturers started designing clusters that had both dials and TFT LCDs.

Now, OEM’s and automotive consumers find TFT Displays more attractive and self-sufficient as they establish connectivity features with smartphones. This feature has increased the UX expectations of the cluster enormously. Apart from this, TFT displays support complex menus for configuration with the same old constrained spaces and make user preference-based data available. With the help of selectable themes, consumers can customize the look and feel of their clusters It is also possible to have a highly intuitive 3D graphics display with contents modified according to the current driving mode of the driver. Despite having a touch panel, an interactive HMI can be made possible with just a few physical buttons on a TFT-based instrument cluster.

Embien designed and developed such an instrument cluster prototype on i. MX RT1170 - a dual-core crossover MCU, running on Arm Cortex - M7 core at 1 GHz and Arm Cortex - M4 at 400 MHz. Particularly designed for the two-wheeler market, this cluster leverages the power of the MCU - i. MX RT1170 used for applications such as Human Machine Interface (HMI), Motor Control, Low - end Instrument Clusters, Home Appliances etc.,

The device variants offered 4 layers of displays interfaces, each of which can host up to 18 sprites. These aid in the best possible way to render widgets with minimal effort from the software/CPU. Rendering was done quite faster with low/no CPU overhead with the help of dedicated GPUs. An internal SRAM of up to 2 MB with 512 KB of TCM for Cortex - M7 and 256 KB of TCM for Cortex - M4 was made available to hold the display information alongside a JPEG decoder.

The hardware design had multiple LCD options that included 5” and 7” LCDs. It supported both 18-bit and 24-bit interfaces. A CAN transceiver was made available to communicate and collect information from the electronic control units (ECU’s). An external Bluetooth module connected over UART offered connectivity to the smartphone to intimate / pick /reject calls, receive messages, and other notifications. Unique features like Android / iOS mobile application integration, Navigation Map over Bluetooth etc., were enabled to satisfy driver aesthetics.

Embien’s interactive digital cluster design on i. MX RT1170 included various features such as intuitive display of vehicle information, customizable display with a user-friendly interface, easy upgradation and favourable compatibility, smooth animation for changes between screens, etc., All the UI designs were created using Adobe Photoshop and were imported via Flint IDE - the ideal tool for HMI development on Sparklet. This combination proved to be very effective, and the activity got completed within weeks. 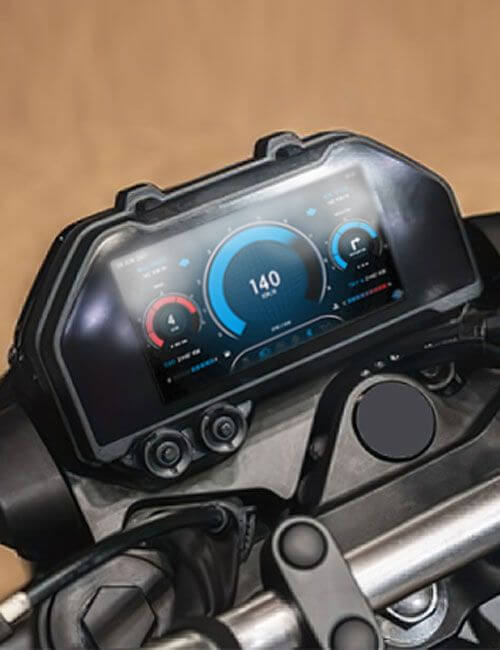