TFT Based Instrument Cluster with Sparklet on Renesas RH850

Instrument clusters are the interface with which the system interacts with the driver of a vehicle. Whether it is a four-wheeler or a two-wheeler, the important information about the vehicle such as vehicle speed, engine speed, fuel level, etc are conveyed by the cluster. They help drivers get informed decisions and are as important as any other part of an automobile.

Automotive Instrument clusters, just like any electronic device have been evolving a lot. The newest feature is the support for TFT LCDs with attractive graphics. For a requirement for a major Tier 1, Embien developed and demonstrated the Instrument cluster concept with its Sparklet GUI library optimized for Renesas RH850 series.

Originally the instrument clusters were mechanical devices. Called as the Mechanical Instrument Clusters, the devices worked on the principle of converting motion from one mode to another. Typically the engine speed is transferred via cables that drive a cross-coil indicator. Based on the rotation speed, the magnetic rotor moves the pointer, displacement of which indicating a proportionate to the actual speed. Then with the advent of electronics, electromechanical clusters came into existence. The engine/vehicle speed was transferred via rotary encoders which generates a series of pulses based on the speed. The pulses are counted with digital counters and stepper motor drives are used to drive the pointers.

These electro-mechanical devices are still the most predominant segment in the Instrument cluster market. Generally providing the minimum information of Engine speed (tachometer), vehicle speed (speedometer), fuel gauge, and oil temperature, they also had tell-tale lights for events such as engine temperature, battery level, brake, etc. They provide a high level of reliability and are easy to design conforming to functional safety requirements.

While the instrument clusters evolved, the other electronics in the car also underwent drastic changes. The Engine Control Units (ECUs) became the de-facto controller of the engine and a lot more controllers popped up across the vehicle each controlling an aspect of the automobile such as the lights, mirrors, seats, infotainment system, airbags, etc. The count of such units – communicating via a bus such a CAN, crossed even a hundred in some vehicles.

More the controllers, the amount of information available to the driver also increased manifold. The electro-mechanical clusters had a fixed arrangement and are not scalable. OEMs looked for a better management of space and new technologies for the IC.

Initially the manufacturers added a limited display – a segmented or graphical type to extend the information availability. Multiple trip meters and odometers were included as part of the functionality. Then with falling LCD prices and cheaper microprocessors, OEMs started adding TFT display. These displays, being highly configurable offered numerous functionalities in a minimal space. Still the electromechanical dials were not ditched completely in favor of TFTs. The TFTs had a rather gradual entry into the space. Some initial configurations had TFT LCD at the center with dials in the sides or a dial in the center with LCDs in the sides.

Nowadays, OEMs and customers are open to have Full TFT displays. Having used to smartphones, the UX expectations from the cluster have increased manifold. TFT based ICs offer a lot of options that were not possible earlier. With the same space, the amount of information that can be displayed has increased. It is possible to have complex menus for configuration. Of the volley of data, only those of interest can be shown based on user preference. Users can also customize the look and feel of the display with the option of selectable themes.

It is also possible have attractive 3D graphics that are highly intuitive. And the contents of the display can be modified based on the current driving mode. Though it is not recommended to have a touch panel, with limited physical buttons, it is possible to interact with such an HMI.

Embien designed and developed such an instrument cluster prototype with Renesas RH850 based MCU. Designed for the two-wheeler market, the cluster leverages the power of the MCU – the Renesas RH850, specially designed for such HMI applications. Variants of the devices offer up to 4 layers of displays each of which can host up to 18 sprites. These offer the best way to render widgets with minimal effort from the software/CPU. Powered by dedicated GPUs, rendering is also quiet faster with low/no CPU overhead. Up to 2.5MB of internal SRAM is available for holding display information along with a JPEG decoder.

The hardware designed had multiple LCD options including 5” and 7” LCDs with support for 18-bit and 24-bit interfaces. A CAN transceiver is available to communicate and collect information from the ECUs. An external Bluetooth module connected over UART offers connectivity to the smartphone that can be used to intimate incoming calls, pick/reject them, message and other notifications, etc. Another unique feature with the design is to support navigation map over Bluetooth.

Embien’s instrument cluster demo for 2 wheelers included various features such as intuitive display of vehicle information, customizable display, smooth animation for changes between screens etc. All the UI designs were done with Adobe Photoshop and imported via Flint IDE, the ideal tool for HMI development for Sparklet. The combination proved to be very effective in helping to complete the activity within weeks.

The below video demonstrates the same.

The design enabled Embien to develop a next generation of Instrument Cluster and also demonstrate the capabilities of its Sparklet Embedded Graphics library. 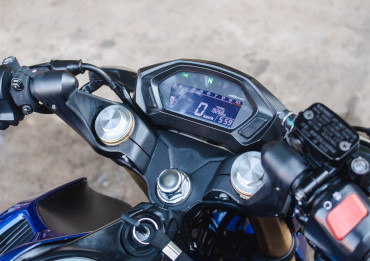